View source
⚠
The information in this article or section was last reviewed on November 15, 2021. 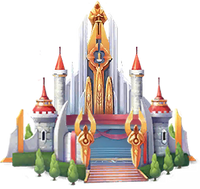 The Hall of Fame is a game mode where battle are fought against the Squads of other players controlled by AI. Battles in the Hall of Fame determine ones League, which is tied to various unlocks and determines the value of rewards from most game modes. The Hall of Fame can be accessed by clicking the Hall of Fame building using the fight button on the bottom-right corner of the main screen. 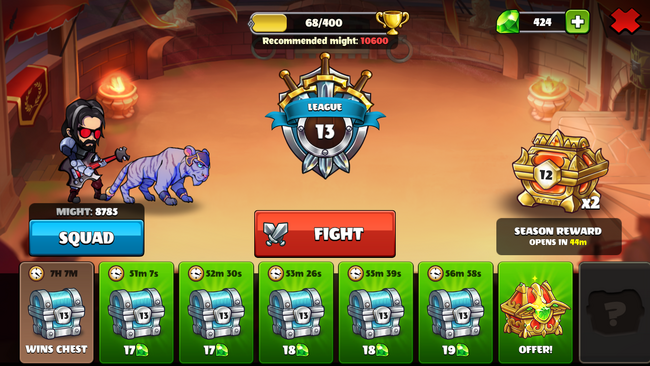 A Squad is composed 8 Heroes, a Warlord and an optional Pet. The Hall of Fame UI provides a quick overview of current squad Might, Warlord, and Pet currently in use as well as quick access to the Squad management page.

Fame is the rating system used to determine League. Each win and loss within the Hall of Fame adds or subtracts a certain amount of

Fame, which can be increased by Win Streaks and a Fame Boost. Fame is a cumulative value that can be found on the Stats tab of the Player Profile The Hall of Fame UI displays the required fame for the current league as a progress bar starting from 0 - if a player fills the bar, they will be promoted a league and if the player drops below 0, they will be demoted to the previous League.

Fame threshold for the next League or accumulates a Win Streak, more difficult opponents will be selected.

Leagues 1 and GM matchmaking is based on

Fame instead of Recommended Might. Opponents in League 1 and GM are selected within a range of the player's current

A player's current League is shown in the middle of the Hall of Fame UI. Leagues are based on the total

Fame a player has earned in the Hall of Fame.

A Hall of Fame Season constitutes 2 weeks, starting and ending on Tuesday 12AM UTC. Season Rewards are distributed at the end of each season based on the maximum League reached during that season. At least one battle must have been fought during a season to claim the rewards.

Chests from victories in the Hall of Fame are located at the bottom of the Hall of Fame UI. A player initially has access to 4 Chest Slots, with the option to purchase an additional 4 for a maximum total of 8 chest slots.

Gold (10%, up to 100% at a 10 win streak) for each victory, but will also cause matchmaking to select more difficult opponents.