Mighty Party's "game within the game", Turf Wars can only be played while you are part of a Guild. As soon as you enter your first war, your faithful major-domo will be waiting for you with a little introduction and mini-tutorial.

Unlike one-to-one combats (which are against AI), Turf Wars take place in real time, thus making them the real player versus player feature in Mighty Party.

You'll then be directed right into the Turf Wars Map. Maps change on a weekly basis.

The bar on the right side shows the Turn advancement. You can follow the events on past turns by selecting them in the bar.

The map contains a total of 30 tiles and is set in a grid structure of 6 columns numbered 1 to 6 and 5 lines named A to E. Tiles are named first by their line and then by their column, so the first tile in the grid is A1 and last is E6. On starting a new turf map, all tiles will be neutral, uncoloured, and you'll see 5 tiles on the borders of the map highlighted with a lime-green border. These will be your guild's entrance tiles. Each guild is given 5 entrances, and some may share a common entrance, so you better choose your first moves wisely! They can determine your success or your downfall!

As the turf advances and each tile is conquered by different guilds, they will be coloured on a different hue per guild, so you can distinguish them even if several guilds share the same crest or have similar names. Your own tiles will be always coloured lime-green. On conquering a tile, you will be able to access all adjacent tiles, and so they will become highlighted with a lime-green border. When there is an attack on a given tile, a little Cross-Swords mark will appear on it. Several marks would mean it's being attacked by different guilds/riots at the same time. 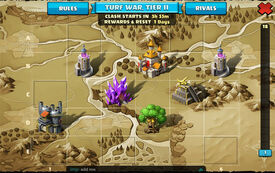 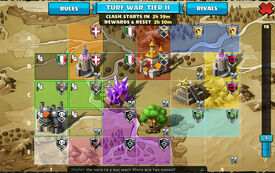 By clicking on a tile, you'll see a description of what kind of tile it is, rewards it offers for capturing and holding it, bonuses or penalties that apply to troops sent into it and it's defence and riot chance. If you are either Guildmaster or Officer of your guild, you will be able to set one of two marks (Bullseye or White Flag) in the tile to better signal objectives and battle orders to your guildmates. No one but your own guildmates can see these marks.

Contribution, which you get from all of them). You will notice that tiles on the border of the map offer lesser rewards than those closer to the center, and also that building tiles offer better rewards than clear tiles but are more difficult to capture too. All tiles that reward cards will give cards pertaining to the race assigned to the tile.

There are 3 types of clear tiles, all of them reward Common cards:

You can find a random set of buildings from the following categories, all of them reward

Every turf war, you will face other 9 guilds (making this a total number of 10 rivals).

Through the Rivals Button on top of the map, you will access the rival list. Here you will be able to see your enemies listed from the most to the less successful in the current map. You'll see their guild level, number of members and total tiles they are holding at the moment too. Also, you'll be able to recognize them by assigned colour, so you can locate their forces on the map accordingly.

By clicking on each rival, you'll access their Guild Member List. This allows you to assess your rival's potential by calculating their forces and how many troops they already deployed or still hold. You can determine if they pose a real threat or no by wisely making use of this information. Also in the rivals list, you'll see a button that allows you access to the War Chat (it can be accessed through its own button on top of normal World Chat too). In this chat tab, you'll communicate only with those present at current turf war map. 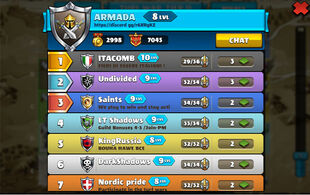 Each turf war consists of a total 18 turns, divided into groups of 3. Every week, turn 1 starts after Monday reset and turn 18 ends with Sunday reset. Daily reset takes place at 19:00 hours UTC. Every turn ends in a Clash, the clash last for 10 minutes, during which battles for tiles are resolved and no troops can be deployed. At the top of the turf map, you have 2 counters that tell you how long it will take yet until next clash and next reset both.

You can work out your local times in base to UTC here: https://time.is/en/UTC

Each player can deploy all troops only once each reset, after daily reset, troops become available again. You must plan ahead when it's best to deploy your troops. You don't have to send all your troops at once, you can divide them for sending them to different tiles or deploying them in different turns.

If a player that had deployed troops already leaves the guild or is expelled from it, the deployed troops pertaining to him leave as well. Why is this so? Simple, to avoid guilds deploying infinite troops by inviting and expelling infinite players (invite, deploy, expel, repeat).

At the same time, a player entering a guild will suffer a "quarantine" of a full reset, during which he/she will be unable to deploy any troops (whether or not the player had deployed troops in another guild previously). This is to avoid guilds inviting players only as a desperate measure to get a little extra power in the ongoing clash/reset and expelling them as soon as their extra is not needed. The new player will be able to deploy troops normally after a full reset as member of the guild. In addition, players who frequently swap guilds (more than once in 2 weeks) will be unable to deploy troops for up to 5 days based on the new guild's tier/level.

Here is an example deployment of troops step-by-step:

On conquering a tile, its defence will be equal to the higher attack minus the defence forces. If 2 or more guilds or a riot vs. guild takes place, the defence resulting will be the difference between the 2 highest attacks.

Who gets the tile in case of a TIE? If the result from defender against attacker forces amounts exactly to 0, the defender keeps the tile with 0 troops in it, even if the attacker shows up the crown symbol.

What if there is a TIE between 2 attackers over the same tile? In the rare case where the number of troops is exactly the same between the top two attackers, the defender keeps the field with 0 troops left, even if the defender has not the most troops.

At the end of every 3rd clash, when battles have already been resolved and resulting defences calculated, defences on every tile are reduced by 70%. So if a tile before clash had 250 troops and it was conquered by a force of 350, the resulting defence in turns 1 and 2 would be 100 troops, but after the third clash, there will be only 30 troops left.

Deployed troops can be boosted using

after sending them by clicking the boost button. If you don't have enough

Gem. Below are the costs and amounts to boost:

On opening a tile description, you'll see a Riot Chance note. It can go from Very Low to High. What does it mean?

Well, to avoid a single guild capturing the whole board if no other guilds attack their tiles, Riots happen. These are random and fortuitous attacks by neutral forces, generated by the game and thus not part of any guild. The more tiles your guild controls, the higher the riot chance and the higher number of neutral troops will appear.

Neutral riots act as a normal guild attack, if you want to conquer a tile attacked by neutral forces, you will have to outnumber the neutral forces.

For a certain amount of

Gem you can hide the amount of troops your guild are going to have in a territory, so the rest of guilds in the turf war will see your guild badge and three question marks instead of the total power you have. It will be noted in the turf war chat whenever a player hides troops. 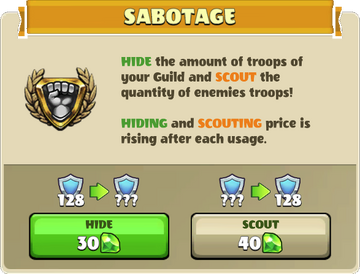 Any other player from a rival guild can pay some more

Gem as well, If someone scouted total power would be only revealed for who scouted and his/her guild members.

This option is usually used in the 3rd clash.

Gold is rewarded based on the number of Troops deployed. The formula is:

The constant value is based on the Turf War Tier and Troops deployed are not affected by cell bonuses:

At the end of every Third Clash, you and your guild will receive the rewards promised by each tile in your power. The amount each player receives will be in relation to the effort contributed in troops during the whole 3 turns. If you were holding a Building tile, the guild will get the amount of

Influence assigned to it. Each player gets a percent of each tile reward depending on the place in the guild:

At the end of Turn 18, rewards are doubled.

The Guild fountain will send you automatically some

Elixir every day depending on your guild's level. You also get some

Contribution each day if you are a member of guild participating in the guild war.

Turf War maps are split into several Tiers based on each guild's performance, using the guild's War Score. The War Score is calculated daily at the end of the 3rd clash, is cumulative throughout the entire weekly turf war, and resets weekly with the start of each new turf war. War score can be calculated using the following formula:

Deployed Troops are affected by cell bonuses and elixir. The constant value is based on the Turf War Tier:

Tiers are determined based on War Score placement as well as the total number of guilds participating in Turf War for the week:

For example, if 50,000 guilds participated and a guild placed 900th in the week's turf war, the guild would be in in the 1.8th percentile of participating guilds and thus in Tier III for the next turf war.