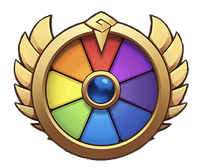 The Wish Shop is a special event available at League 23 that occurs every 4 weeks and lasts for 3 days over the weekend. The wish shop allows players to add up to 3

Legendary Heroes to the possible rewards for a spin.

The next Wish Shop is scheduled for:

The number of heroes that can be selected are based on maximum League:

Once a hero is selected, it cannot be selected again for 2 wish shops. You can also click on a locked hero to see when it will unlock.

You receive one free spin every 24 hours. The normal cost for a single spin is 299

Gem. It should be noted that the first spin during the event will always reward you with a legendary hero. After that, the chance for getting a particular reward is a constant, but how many of that reward you can get is based on maximum league as follows:

Each chest opened, including the chest from the free daily spin, will contribute towards a bonus chest which will always contain legendary heroes. The contents and requirements per bonus chest increase with each bonus chest opened.

The main purpose of the Wish Shop is not to be a large source of hero souls but to unlock the heroes that will strengthen your squad and help you to progress in the game easier. The earlier you add heroes to your collection, the earlier you can see those heroes showing up as rewards whenever you open a legendary chest. Below are some recommended heroes that should strengthen your squad depending on what you feel you should improve. After you feel confident that your squad is as strong as you could make it (with just the raw heroes), you can consider getting soulbind heroes for your squad members to make them even stronger!

Here are some heroes that are highly recommended by the Mighty Party community: Generally, a Carry should be the first pick in order to begin developing them as soon as possible via summons and the Black Market. Ideally the carry would also have a fully unlocked Evolution line in order to acquire more souls. If none of the below heroes are an improvement, wishing for Gold Mine heroes or heroes to complete Soulbinds is next. See the Gold Mine section of the New Player Guide for more information.

If you are unsure of what to pick to improve your existing squad, blair, Charon, Soul Catcher, Dead Lord, and Eostre the Dawn Glow are heroes that can fit in all squads regardless of squad composition. If you just started playing or are just starting to put together a legendary squad, Grace of Rockfleet, Legion, God of War, and Shadow Shaa-Moona are good heroes to build a squad around.

Carry
Carries are Heroes that will win the match when played and left unanswered. A carry should be leveled to comparable strength as enemy heroes in order to be effective.

+ Puppets protect rows, reflect damage, and Cleanse friendly heroes
+ Win condition from sacrificing Puppets
- Summons are random and can block cells or not protect herself
- Too many summons can become a problem

Support
Support Heroes buff or protect friendly heroes, and are usually played to set up an advantage for the future. Support heroes do not need levels in order to perform their role, but levels will improve their effectiveness.

+ An answer to enemy Ranged heroes
+ Is useful even after being played by granting Pierce and Mental Shield
- Ranged enemies are not killed, only set to 5 HP. This can be fixed by using the Guild Bonus Divine Retribution
- Fragile and needs to be protected

Control
Control Heroes disable or hinder enemy heroes, and are generally played as an answer to a threat. Control heroes do not need levels to perform their role, but levels will improve their effectiveness.

+ An answer to all Melee heroes except those with Immunity or Flight
+ Transforms an enemy so stats do not matter
+ Summons zombies with poison in the column to protect other rows
+ Gets significantly better with levels
- Transformed enemy remains on the field to potentially shield enemy Ranged heroes. This can be fixed by using the Guild Bonus Blessing of Vlad
- Potentially blocks melee cells due to summons

+ An answer to all Male heroes except heroes with Immunity
+ Silence cannot be prevented as it occurs upon play
+ Can block a lane due to Flight and high Health
+ After being played, buffs allies and damages enemies every turn
- Enemies are only Silenced so they will still have their normal stats and can attack as well as potentially shield enemy Ranged heroes

+ An answer to all heroes except those with Immunity
+ Freezes and reduces an enemy's Health to 1
+ Warlord healing while on the field
- Target is random and health reduction only happens if the enemy remains Frozen
- Enemy is not killed, only reduced to 1 HP
- Needs Order heroes in order to be useful for more than 1 turn